Already this week, I’ve preached about the confluence of Love and Death in the story of our faith, so it shouldn’t be a surprise that those two themes reassert themselves in our gospel reading this morning. Especially not surprising, since today’s reading follows the one I preached Wednesday in John’s gospel too.

But this story of love and death, of weeping and resurrection, is even more poignant today than earlier this week, because of the school shooting in Parkland, Florida. 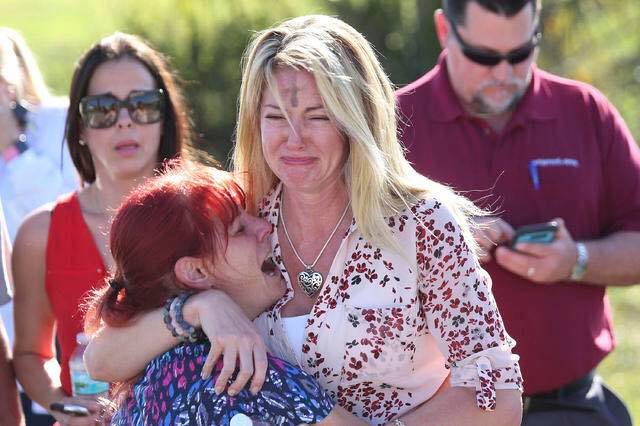 On the day we gathered to mark ourselves as dust, 17 young lives were ended in another mass shooting, at another school. The footage and interviews were heart-wrenching, but this picture has haunted me all week. This woman, this mother, marked with the sign of death and love, suffering and life all rolled together, stands so marked outside the school, waiting to hear whether her child is among the dead.

Many of us wept too as the news unfolded Wednesday, as we were reminded once again of the epidemic of gun violence in our country, as we mourn more lives needlessly lost. That day’s news proved we don’t need the mark of ashes in order to remember our mortality. It stands before us every day we send our children to school where they now practice active shooter drills, every time we take off our shoes to board an airplane, every time we enter a crowded public place and wonder if we’re sitting ducks for terroristic violence.

Death is all around us, not just violent ones either, but tragic and senseless all the same: from car accidents, to this year’s flu, to little babies struggling to breathe in Rochester.

In a week so full of death, it seems fitting that our gospel this morning should reek of mortality too. As I looked at this picture, I thought, this could be Mary and Martha weeping at the bedside of their beloved brother, while they wait for their friend Jesus to show up.

This could be Jesus himself when he finally gets to Bethany and his dear Lazarus is already in the grave. “Jesus wept” John tells us, the shortest verse in the bible, just two words containing as much agony as this photo. My colleague Erica Schemper wrote “Perhaps this might be one of our icons for God this Lent: a mother, marked with a cross of ash as a sign of mourning, crying out for the state of the world.”

And I continued to ponder this Lazarus story amid the news of the week, I found myself tempted to join Mary in saying to Jesus, “Lord, if you had been here, these loved ones might not have died.”

With those words, “Jesus wept”, John reminds us of a Lord who has such love for Lazarus and such compassion for his sisters that he stands by their side in mourning. What a beautiful image for those who feel alone in their grief, to think of Jesus weeping with them in their deepest grief because he loves us so much.

That little verse kept coming back to me this week as I watched footage and heard interviews, sometimes being brought to tears myself. All week I could envision Jesus there with the grieving families and traumatized classmates, weeping too, over the brokenness that had infected their lives.

But as I sat with this story, talking to Jesus as he sat and wept by my side, it occurred to me that his being there, his compassionate grieving with us, is not enough. I am glad that he joins his tears with ours, but I want more than tears from him.

I mean, what if Jesus had simply come to the tomb of Lazarus and wept there with Martha and Mary? They make it clear from the beginning of the story that they too want more from the Lord. “If only you had been here, our brother would not have died.” Both sisters say this to Jesus separately. It’s an accusation, but also a question, because Martha goes on to say, “But even now, I know that God will give you whatever you ask of him.” Even as they weep and mourn, they know that Jesus is more than just a dear friend.

He is the Resurrection and the Life too, as he tells Martha, and he’s not talking about a resurrection at the end of time, or a life that Lazarus will live someday with God into eternity. In addition to his solidarity with their grief, Jesus wants to give them something greater.

Remember this pattern in John’s gospel, that Jesus always gives more than is asked of him. Even Martha, who knows Jesus better than most, doesn’t expect him to raise her brother from the dead. Mary doesn’t express any faith or expectation at all. Jesus’ weeping is not just grief over the death of Lazarus. His weeping is grief that even his closest friends don’t seem to understand who he is or the power that is in him.

So he weeps, deeply moved by their grief, and disturbed in his spirit by their unbelief. Then, still weeping, he gets to work. Against Martha’s protests about the smell of an open tomb, Jesus commands them to take away the stone, a deliberate foreshadowing of his own resurrection 8 chapters later.

And praying while he works, Jesus calls Lazarus from the tomb, four days dead and still bound up in graveclothes. “Unbind him and let him go” he says.

This resurrection should be the climax of the story, the sign that removes all doubt about who Jesus is and what he’s come to do. Instead it sets him directly on the path to his own death. Aside from the crucifixion itself, this is the moment in John’s gospel where the brokenness of humanity is most evident. That is truly what makes Jesus weep, for he sees clearly in this moment that even the resurrection of his friend is not going to wipe away the tears of all people for all time. He weeps in part because he knows that his own death is coming, and must come.

I came across this beautiful quote from Frederick Buechner this week about tears, and I think it applies to Jesus as well as us this week.

For Jesus, his tears summoned him onward to crucifixion and ultimately to his own resurrection. For us, for the tears we are weeping over the victims of gun violence in our nation’s epidemic, I hope they are summoning us forward toward the saving of our souls too. Tears are part of the process, even for Jesus, of bringing new life out of ugly and tragic death.

I hope you are still letting yourselves be moved to tears, even as these tragedies become commonplace. Because even as he weeps with us, his grief-choked voice calls us to come out of all the places where the stench of death overwhelms us.

If we have the courage to listen, to unbind ourselves from the grip of things that kill us, the promise of resurrection is ours as well. My prayers is that even as he weeps with us, Jesus may use our tears to move us toward life.